Values are the different shades of grey between white and black. Artists use values to translate the light and shadows to create the illusion of a third dimension.

A full range of values is the basic ingredient for shading. When you can draw lots of different values, you can begin to add shading, and therefore depth, to your drawings. With shading, the magical illusion of three-dimensional reality appears on your drawing paper.

Two kinds of Shadows
There are two kinds of shadows that occur when one light shines on an object, a cast shadow and a form shadow. 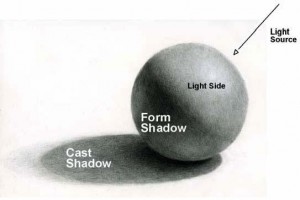 Example of the use of shadows in contemporary art.

Email ThisBlogThis!Share to TwitterShare to FacebookShare to Pinterest
Etiquetas: Elements of Art, Value/ Light and shade